Lalbagh Fort or the fort Aurangabad

Lalbagh fort - the most magnificent but incomplete Mughal fort in Dhaka

The riverine region of Bengal demanded forts of a different kind that could stand attacks from the river. The lack of stone in the Bengal delta was a barrier to replicating the fortified structures of Agra and Delhi. Lalbagh Fort or Fort Aurangabad is the most magnificent but incomplete Mughal fort at Dhaka, situated in the southwestern part of the old city overlooking the Buriganga River to the south. The Mughal viceroy of Bengal Prince Muhammad Azam, son of Emperor Aurangazeb, was the founder (1678 A.D.) of this fort. Governor Shaista Khan was supposed to complete the project, and after the premature death of his daughter, the fort was left unfinished again. Among the remaining structures, there are a long-fortified wall, three gates, a large tank, an audience hall and hammam, the tomb of Bibi Pari, a service block with a rooftop garden and a mosque. The remains of all Mughal architecture at this fortified area are now a public park with a museum of Mughal-era artefacts and a very well-maintained garden that hosts lots of visitors every day as well as a breathing for the congested locals. 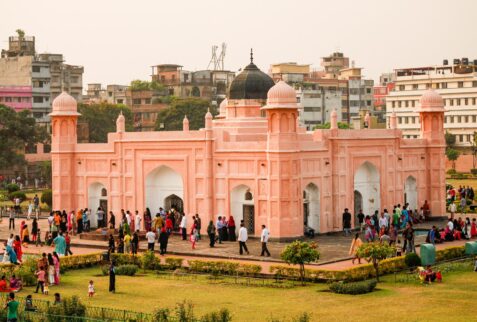 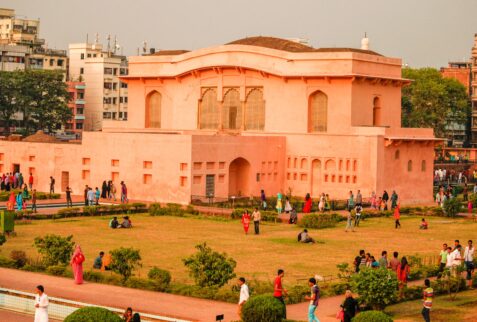 Some background history of Lalbagh fort

The fort is standing on the northern bank of the river Buriganga, southwestern part of the old town and not far from the Dhakeshwari Hindu temple. The name Lalbagh is hard to explain, except on the assumption that there was a garden on this place before the fort was founded, and this assumption receives support from the fact that the neighbouring locality is still called Kaserhatta (i.e., Qasr-hat = palace market). It is also known by the name of Fort of Aurangabad as it was built during the reign of Aurangzeb in A.D. 1678 by Prince Muhammad Azam when he was viceroy of Bengal.

It is hard to understand why it was left in an incomplete condition. The surviving edifice shows a long fortification wall on the southern side with a gateway at the southeast corner and a further wall on the western side. There are remnants of two gateways on the north, one of which is in line with the southern gate. The remains of the city gate are beyond the southwestern corner. The southern wall shows many features. A number of octagonal bastions projecting beyond the wall can be seen on this side, and on the inner side, we find earth filling up to the rampart level. An underground cell has been traced below this filling, which probably led up to the outer bastion near the river. A well-decorated entrance leads into the cell. From within the bastion near the southern gate, a passage was discovered, which appears to have provided access to the soldiers into the wall’s interior and other bastions. The second storey of terrace wall was added all along this riverfront. The remains of the two-storey wall show numerous door openings, and it is difficult to understand the purpose of such open doors in a fortification wall. As these constructions are found only on the western side of the southern gate, it seems that the buildings of the eastern half yet remained to be taken in hand. On this supposition, this gateway is taken to be central in the plan. In between this and the northern gate lies a masonry tank in a dilapidated condition. A little distance to the west of the tank is a two-storeyed building, which is remembered as an audience hall. On one side of this hall stands a few ruined structures said to be the hammam.

This incomplete gate was magnificently planned. To the west of the gate, a curtain wall was added to accommodate reserve soldiers. The gate proper was designed in the true Mughal style complete by itself and was supposed to be three-storeyed in height. The elevation retains all the embellishing features of a Mughal gateway. A lofty archway to the top of the second story forms the nucleus of the elevation, which is emphasised by slender octagonal minarets that shoot up on either side. Beyond on the right and the left are to be seen a deep plastered semi-octagonal alcove below and an oriel window in two stages above with a cupola as its crowning element. The last storey gave way to a further series of doorways and other embellishments, and on the top over the four corners were to be seen pillared kiosks majestically breaking the skyline, two of which still remain. Below the central archway opens the door, inset with stone arch and having knob decoration at the spandrels. 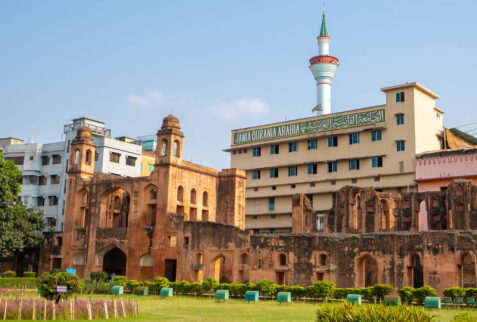 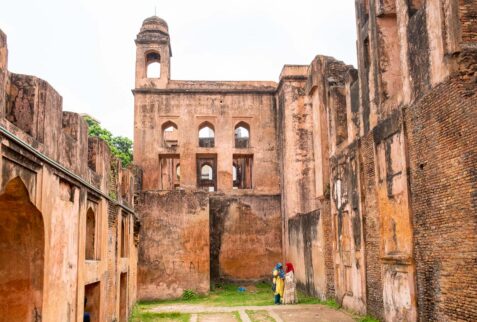 The gateway provides all the necessary features in the plan, two archways into a domed square hall having subsidiary guardrooms. The under-ceiling of this hall shows net-pattern designs. The approach to the top storey was to be provided from the inner side of the fort, and space is still left on either side of the gate. But it seems that the steps yet remained to be built. The inner elevation is also quite appealing. On the whole, the gate is much more pleasing for its graceful setting of the different parts. Its beauty is more feminine than masculine.

This is the three-domed type of mosque standing a few yards west of the Tomb of Bibi Pari within the fort, built by Prince Muhammad Azam. The mosque occupies the backside of a raised platform, the front portion serving as an open terrace. It is an oblong structure, measuring 19.81m by 9.9m with octagonal corner minars (minarets) shooting above the parapet wall with plastered kiosks. (Dani 198) 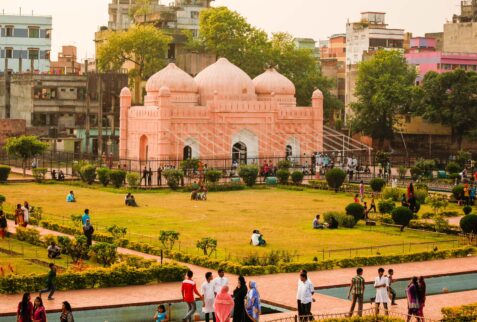 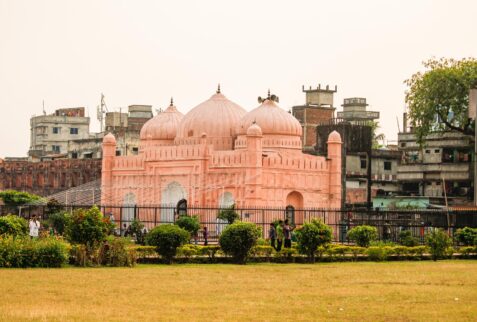 The eastern facade is highly decorated with rectangular panels and multi-cusped arches. The middle entrance is bigger than the side ones and is contained within a fronton bounded by engaged pinnacles. The main arched door opens under a half-dome decorated with plastered net-work on the underside. The three domes cover the roof, and the central dome is bigger than the side ones. All have basal leaf ornamentation and are crowned with finials. Internally the hall is reduced into three unequal bays by two lateral arches, the side bays being smaller in width. A clever trick has been applied to cover the smaller bays with domes by introducing a half dome on the sides, on which the actual dome springs on a further series of pendentives. Since it was built, this mosque is in daily use for the prayers of the local Muslim community.

The most complicated Mughal tomb architecture in Bengal

This complicated plan is a new introduction in Bengal and is ultimately derivable from the Persian elements borrowed during the Mughal period in the buildings at Agra and Delhi. The tomb of Bibi Pari stands prominently in the middle of the fort and is in a very good state of preservation. It is difficult to say who Bibi Pari was. Local tradition identifies her as the daughter of Nawab Shaista Khan, who is also credited with the construction of the tomb. The tomb is placed on a raised platform, the floor of which is flagged with stone. (Dani 212) 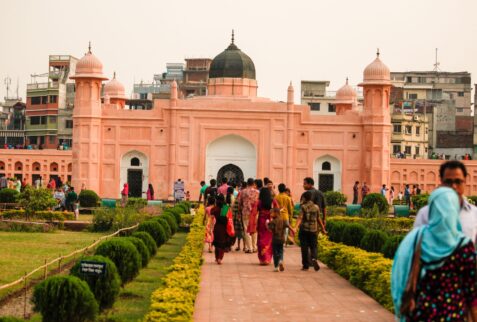 On four sides of the tomb proper, just before the entrance, was originally a reservoir with a fountain in the middle. There are three more tombs on the southern side. The tomb occupies 18.28m square areas in the middle of the platform. At its four corners stand octagonal minarets topped over with plastered kiosks having ribbed cupolas as the crowning clement. The facets of the minarets are divided into rectangular panels, each containing a multi-cusped arch. The facade presents a noble appearance with a variegated central projection for a bigger entrance under a half-dome.

The crowning element over the roof is a false copper dome with a tall finial. The entire effect impresses the viewer’s mind and speaks of achievement of no mean order. Originally the copper dome was gilt. The interior is divided into nine rooms, the central tomb chamber being 5.85m square, the four corner rooms being 3.13m on each side, and the passage rooms being 7.53m by 3.26m.

Only the southern gate is in use to enter the tomb chamber nowadays, which is fitted with a stone door jamb and a door leaf of sandalwood. The leaf bears a pattern of Chinese cross. The walls of this chamber are also faced with white marble, while the floor is laid out in small patterns of black marble. In the middle lies the marble cenotaph made of three steps. The faces of the steps bear shallow foliaged design in relief, while the top shows a takhti carved on it, which is a symbol of a female’s grave. There is another grave in the southeast corner of the room. The walls in the other rooms are faced with marble to some height, and above this marble facing the surface are concealed behind encaustic tiles. The ceiling of all the rooms is made of overlapping black basalt stone. Even the central room shows the same type of construction. On the whole, the building has been planned on a magnificent scale, and every care has been taken to add a sense of grandeur and beauty to it. 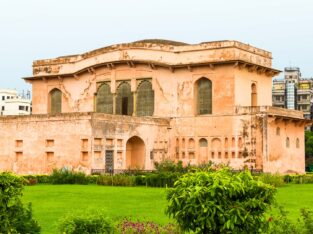 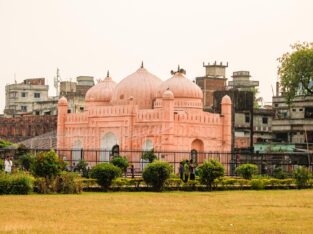 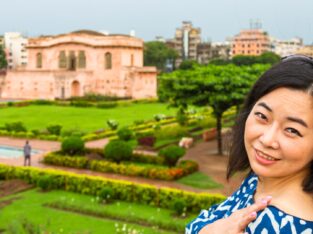 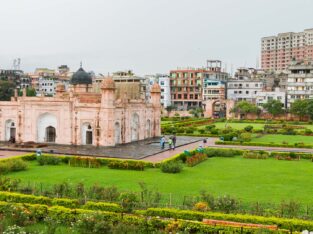 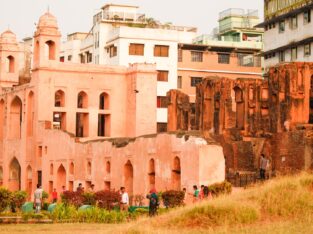 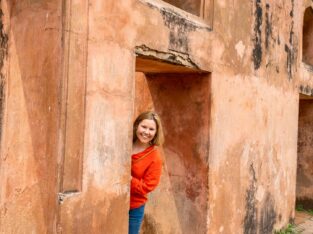 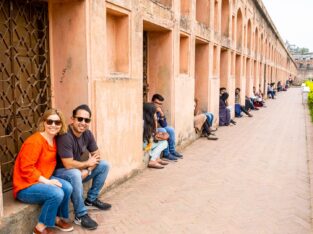 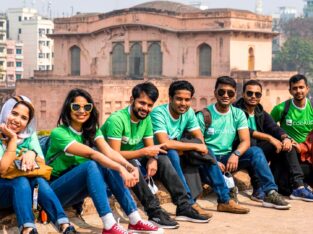 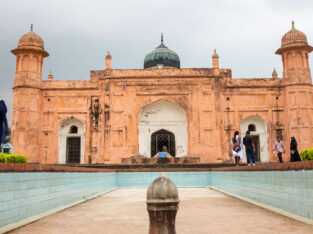 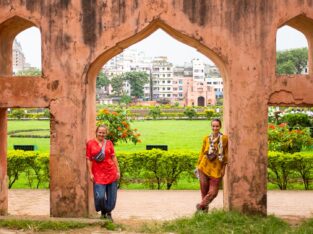 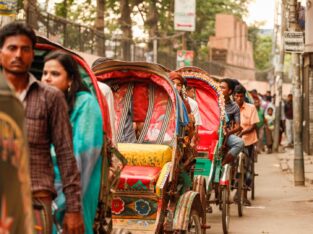 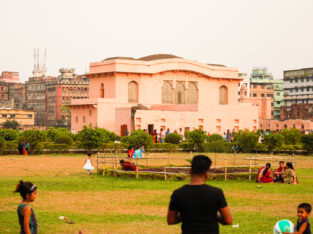 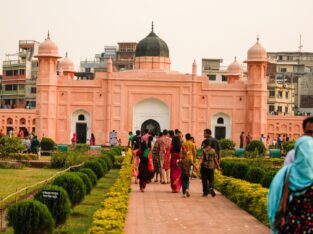 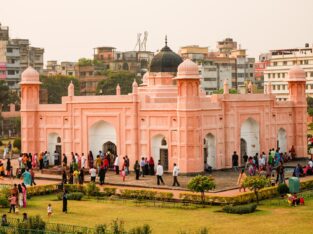