A glorious past and a shining future

When a Bangali thinks of Bengal, a prosperous saree industry comes to mind right after the fish and sweets. Sarees are essential to every Bengali women's tradition, from daily wear to delicate fashion. Dhakai Jamdani is a fine cotton fabric with bright patterns that are traditionally woven by apprentices and artists around Dhaka, Bangladesh, on a handloom. Jamdani saree, also known as Dhakai Jamdani, is one of the most famous textiles representing rich history and heritage.

Sonargaon is the birthplace of Jamdani, and this is the last place in Bangladesh that still makes it. Every piece takes at least a week, up to ten months, to weave one. Only a handful of people in the entire world know how to make this saree.

This fascinating textile art weaving has its roots around Dhaka, Bangladesh. Jamdani fabric is considered to be one of the finest types of Muslin that is handwoven from sheer cotton. Persian origin Jamdani comes from the words “jam”, which means flower, and “Dani” means vase. The name is symbolic of the beautiful floral motifs that ornament these gorgeous sarees. Jamdani textiles merge the complexity of design with softened or vibrant colours, and the finished garments are highly breathable. 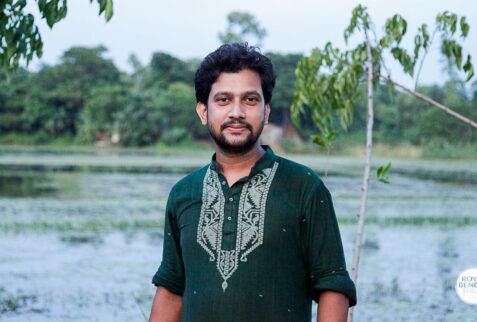 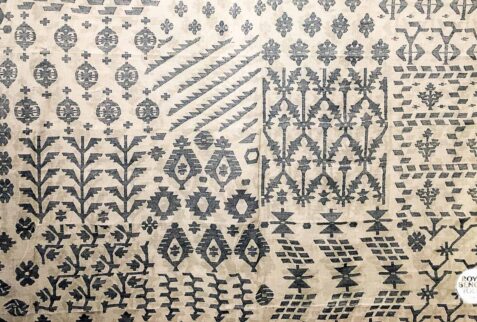 Origin and History of Jamdani

The name Dhakai Jamdani came from the place of its origin — Dhaka, Bangladesh. The earliest mention of Jamdani art can be found in the Arthashastra of ancient Indian teacher Chanakya, dating back to the 3rd century B.C.! This book indicates to it as some fine cloth from the ``Bangla`` and ``Pundra`` area. Jamdani is mentioned in the book of Periplus of the Erythraean Sea, besides the accounts of Arab, Chinese and Italian traders and travellers. Around the first half of the 19th century, James Taylor described the flowered Jamdani. The late 19th century saw the Anglicisation of rooted Indian concepts, and consequently, TN Mukharji referred to this fabric as Jamdani muslin.

Sonargaon, the old capital of Bengal and once-booming city, used to be a part of historically known Dacca (Dhaka at present), is a profound cultural and historical importance in South Asia and beyond. Because of its position at the junction of three main rivers – Brahmaputra, Sitalakhya and Meghna, which apparently leads into the Bongoposhagor (Bay of Bengal). It was the place of the prosperous capital of the independent Sultanate of Bengal from 13th to early 17th century A.D. Sonargaon has served as an important inland port attaching ancient Bengal with the Middle East and Far Eastern lands and was characterised by numerous early travellers, including Ibn Battuta, Ma Huan, Niccolò de’ Conti and Ralph Fitch, as a flourishing centre of business. Its specific ecological context and geography also made Sonargaon unparallel in its production of the world’s most delicate cotton fabrics, especially Muslin. The merchants who came from all around the globe, Muslin was unique to them from this region and therefore highly beloved and as worthy as exotic spices if not more.

Jamdani is one of the most intricate varieties of Muslin; the weavers of the neighbourhood mainly possess the art and skill of its weaving methods. Jamdani weavers have learned this rare, incomparable skill for ages. UNESCO listed Bangladesh’s Jamdani as an Intangible Cultural Heritage of Humanity in 2013, and it was registered as the first Geographical Indicator (G.I.) product of Bangladesh in 2016.

Agriculture and commerce are the primary sources of income for the people of this area. The main handicrafts are cane work, bamboo, weaving (particularly Jamdani), and wood used to craft the Jamdani looms.

Sonargaon is also a famous tourist destination around Dhaka because of its rich history. The architectural style of the area is heavily influenced by the Sultanate, Mughal, and British colonial eras. The historic city includes several pre-Mughal and Mughal monuments and historical tombs. The superbly built colonial-style residences of Panam Nagar, a prominent cloth trading centre in the latter part of the 19th century, are under the protection of the Department of Archaeology.

A world-renowned artist Zainul Abedin set up the Folk Arts and Crafts Museum (Lok Shilpa Jadughar in 1975 ) in Sonargaon. They have also been trying to establish a Jamdani Art resource centre in the museum to exhibit Jamdani patterns with descriptions. 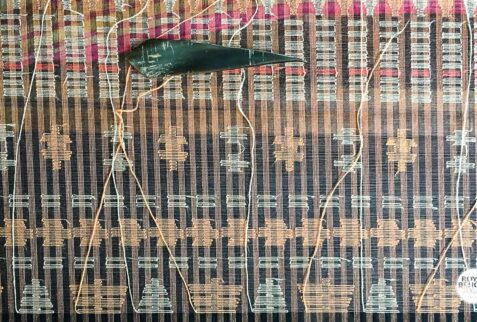 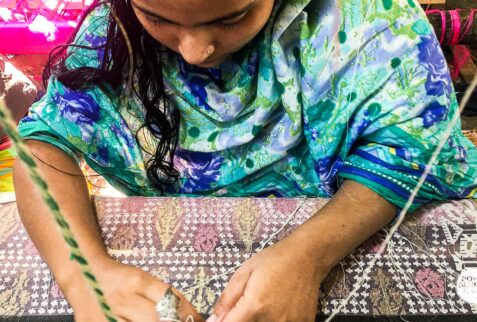 It is now extensively accepted that Sonargaon was the birthplace of the renowned Jamdani art, and it extended northward along the Sitalakhya river banks. There are various reasons for the concentration of the fabric in these regions. It was the production site of cotton, especially because of the appropriate soil environment. The nature of water with appropriate mineral content and climate, perfect temperature and the humidity level was also suitable for Jamdani yarn and weaving. Due to these favourable conditions, Jamdani was unique production to the area. It has been impossible to recreate such quality Jamdani anywhere else in the country.

Unquestionably, Jamdani is the most treasured of all the Muslins. The unique range of designs makes it exceptional, both floral and geometric, which is not found in any other regional textile tradition. These unique designs are considered to be of Persian origin, according to many historians. The 14th century Sultan of Delhi, Muhammad bin Tughlak brought in Persian weavers to work with domestic artisans to weave Jamdanis. This interplay increased symbolically under the guardianship of the Mughals, who took Jamdani and Muslin to a significant peak of excellence and led to the substantial presence of Bangladeshi Muslim weavers. Human and animal images are prohibited in Islam; therefore, all Jamdani motifs and patterns are made up of delicate geometric representations of leaves, flowers and creepers. The pattern’s name may have changed over the ages from Persian ones to locals, but the weaving system, tools and looms have remained the same over centuries. 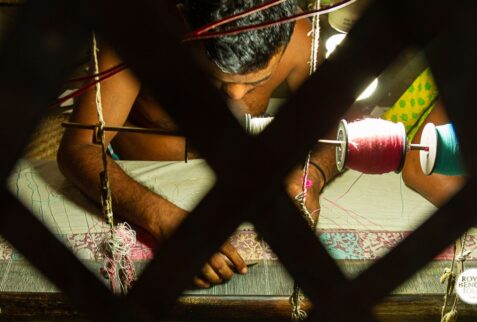 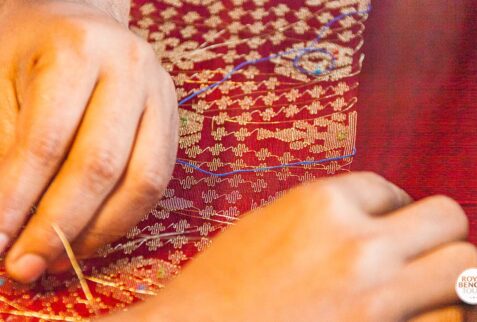 Jamdani's contribution to the economy

The economy based around Jamdani production does involve not only the livelihoods of weavers but also an entire cast of artisans, both male and female, preparing the yarn and crafting of the loom. A key feature of Jamdani weaving is that all designs and motifs are drawn from memory and passed on from generation to generation; father to son, master to apprentice through verbal instructions. It is therefore essential to nurturing this inter-generational transmission of skill to keep the craft alive, as the decline of Jamdani would affect the entire community of artisans with little resources except for their rare skills.

Jamdani industry is struggling to survive. It is declining because of competition from low-cost modern electric loom sarees, poor wages and lack of direct access to national and international markets. Demand for high-end Jamdanis would extensively improve weaver's livelihoods and encourage them to pass on their skills.

Different efforts have been made to revive this craft industry. In 1996, Bangladesh Small and Cottage Industries Corporation (BSCIC) had set up a Jamdani Village in Sonargaon, given land and some other facilities for their workplaces. Various organisation cooperatively mobilised resources to support the community, including credit, access to raw materials and marketing. Documentation and research from museums and private collections have made it possible for artisans to replicate original designs. Significant exhibitions have increased awareness about the rare skill and created a greater demand for high-end crafts. 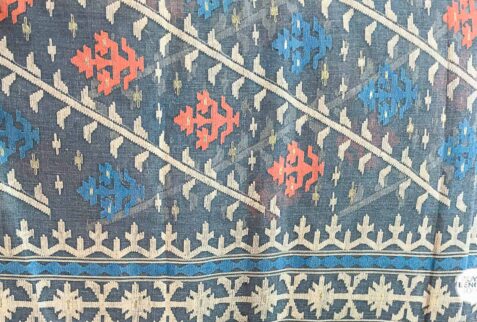 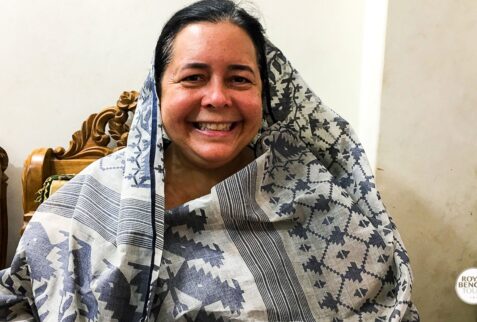 The World Crafts Council was proposed by Jamdani Festival 2019 to enlist Sonargaon as 'World Craft City' (WCC) status. Certainly, this recognition will mobilise the government and artisans towards a shared commitment to creating sustainable knowledge transmission and marketing to ensure its survival in its original form. More importantly, the recognition will secure worldwide cultural diversity and reward its economic and social influence on its community's lifestyle. WCC status would further motivate attention and aid a sustainable livelihood for weavers and all artisans involved in the Jamdani crafting processes.

Why is Jamdani so expensive and Special?

Jamdani is one of the most complicated forms of handloom weaves. This time-consuming weaving and absolute manual labour because of the richness of its motifs, which are directly applied on the loom using the discontinuous weft technique. Threads of silver and gold are also woven together with these sarees to form various patterns and motifs on a quilting loom. The traditional weft creates a delicate, fine fabric, while the supplementary weft with thicker threads adds intricate designs to it. Each of the additional weft motifs is manually added by combining the weft threads with fine bamboo sticks using unique spools. That makes an illusion of the designs floating on a bright surface, which is the unique characteristic of Jamdani weaves.

How much may a jamdani cost in Bangladesh?

The simplest of cotton Jamdani sarees begin at approximately 4000 BDT owing to the intricate process. The prices vary depending on the use of cotton and silk thread, the work, zari (Silver and golden thread), thread counts per C.M./Inches and intricacy of the work. A bridal Jamdani can cost around 15000 BDT, and an exclusive one may cost several hundred thousand BDT.

Best places to buy a jamdani in Bangladesh:

The best is to buy this saree directly from the producers, during a trip with us to Sonargaon. You can also buy from different stores in Dhaka with very high middleman fees: Aarong, Tangail Saree Kutir, Manohari Jamdani Saree House, Dhakaiaa Jamdani, Adi Jamdani House and so on.

How to take care of your Jamdani

Dry cleaning is the best method for your Jamdani saree. You can wrap it in a clean cloth, store it in a saree bag or a plastic bag, and place it over a plain surface.