essence of archaeology and rich culture of Bangladesh

The old buildings and rich culture of Puthia are important parts of Bangladesh's history and heritage. The famous Hindu temple city, Puthia, is an Upazila (sub-district) headquarters of Rajshahi division in Bangladesh. Puthia is located about 30 km east of Rajshahi, beside Dhaka - Rajshahi highway, within a kilometer (southern direction) of the main road. Rajshahi is easily accessible by bus, train, air, or private transport from Dhaka, and Puthia is about an hour drive away. Well-preserved and living temples, ancient architecture, rich culture, diverse history, the essence of archaeology, and beautiful local life have flourished this area for visitors.

Once Puthia was called a village of Laskarpur Pargana, was named after a certain fief holder Laskar Khan. Laskar Khan has been following the examples of other Afgan chiefs of Bengal opposed the establishment of Mughal rules and abstained from paying revenue to the Mughal, during the Mughal period. Mughal emperor Akbar took punitive action against him at the end of the 16th century, and they were planning a revolution against Mughal empowerment. Bravery and trusted general Man Singh was sent to Bengal to suppress the revolutionary governors (Subeders), as an immediate order by emperor Akbar. Whereby Laskar Khan was soon evicted from his fief by general Man Singh with the collaboration of Bhatsacharya, which eventually was granted to the zamindar of Puthia. Bhatsacharya was offered to take charge of quite an area of Laskarpur which he was not interested at! Pitambar, the son of Batshacharya has become the first zamindar of Laskarpur, and Puthia became the capital. Pitambar’s younger brother Nilambar was the first to get the title “Raja” from the Mughals. Pitambar did a lot of fabrications around his kingdom to secure the newly declared capital. He had built huge water tanks (Beki Chowki, Mora Chowki and Gopal Chowki) all around his palace area to ensure the security of the Royal palace from the enemy’s easy attacks. He dug a big pond (Shyam Sharobar) in the centre, by the western side of the castle for beautification as well as a source of good water.

This Puthia zamindary was divided among four co-sharers among whom Panch Ani (Five Annas) and Char Ani (Four Annas) co-sharers earned recognition in conducting the zamindary in 1744. Panch Ani estate of Maharani Sarat Sundari and Maharani Hemanta Kumari was famous for the successful management of their zamindary. On the other hand, the Char Ani estate of Raja Paresh Narayan and his wife Monomohini had become famous as patrons of education and learning. The Estate of Puthia Royal Family was the wealthiest and second-largest estate in British Bengal. In the field of architectural establishments, the role of the Puthia zamindars is praiseworthy. Raja Nilambar’s successor has built some fabulous Hindu temples and a castle around the central pond, among which some of them are ruins now. Puthia has the highest number of historic temples within such a small area. 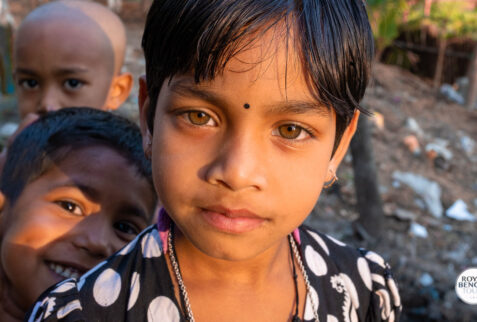 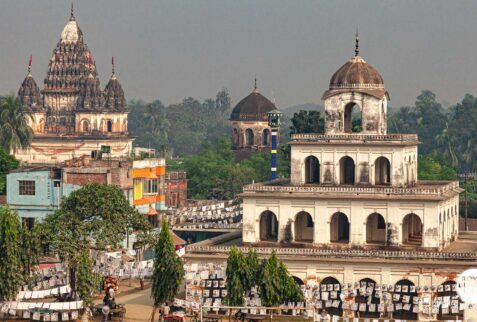 Panch Ani Palace is a two-storied building and the main Royal palace of Puthia with the east-west axis. This Royal palace is surrounded by ditches and situated on the southern end of an open field. According to an inscription found attached on a wall of the building, the Panch Ani palace was built by Rani Hemanta Kumari in 1895 on 4.31 acres of land. She dedicated this palace to her beloved late mother-in-law Maharani Saratsundari Devi. The whole palace area was once surrounded by a robust and unassailable wall, although damaged in many places. According to the terrain plan, the entire palace can be divided into four courtyards:

The zamindar family of Puthia was the last Royal family to flee from East Pakistan (Bangladesh) to India after India-Pakistan separation in 1947. Because of force termination of the zamindary (Landlord) system by the East Pakistan Estate Acquisition Act of 1950, abolishing the feudal land ownership system and confiscating all non-Muslim’s property. Since the family has abandoned their properties, Puthia temple complex and places are national heritage and protected monuments, maintained by the archaeological department of Bangladesh.

Rani Hemanta Kumari residence is a one-storied building located on the eastern part of the Andar Mahala or next to the Govinda temple of Panch Ani Palace. This building is facing to the east and has a porch in the front. Main entrance from the eastern side leads to a central reception hall (10.12 – 6.25 m), having nine similarly arranged rooms on both sides of the hall room to the north and southern portion of the building. There are extended verandahs with arches in the front and rear of the hall room. Imported iron and wooden columns have been used to hold the construction of the roof of this building. Probably this building has been erected in the first or second decade of 20th century.

This beautiful temple is also known as Bhubaneshwar Shiva Mandir. While entering into the Puthia Temple complex, this temple is the first imposing monument right at the entrance, standing on the southern bank of Gopal Chowki or Shiva Sagar (Water Tank). This temple was erected by Rani Bhuban Mohini, between 1823 - 1830 A.D.

Bhubaneshwar Shiva temple is the largest Shiva temple in Bangladesh, an exceptional and attractive for its different architectural style with a plastered finish, is a typical Pancha-Ratna temple style of north India.

The whole structure of this lofty brick-built temple is placed on a large square (65′-0″) and raised platform of (11′-8″) height. It has only one square chamber, measuring 12′-9″ in the centre, surrounded by four small 9′-3″ rectangular rooms at each corner and four covered verandahs in between the corner rooms. Inside of the central square chamber lies a huge Black-basalt Shiva lingam, which is the largest one in the country. This Shiva Lingam is an excellent example of delicate hardstone carving and beautiful sculptural artwork. During Bangladesh – Pakistan liberation war in 1971, the Pakistani military tried to destroy the this Shiva Lingam. Fortunately, their effort has gone to waste; they could not move this giant lingam but has disfigured.

Two different staircases approach to the high platform, brick-built one is on the northern side, and another stone-made staircase is the main entrance to the southern side.

Five ornamental ratnas crowns the temple. The outer and inner walls are plastered with few vertical panels which embellished some mythological figures. About three millions of taka were expended to built this temple at that time.

Once magnificent palace Char Ani palace is now just a ruin. Standing on the southern bank of pond Shan Sharobar, and the western side of the Panch Ani Palace. It was built over 4.80 acres of land area in 1886, which is no more visible excepts some ruin axis of the building. Only surviving ruined condition is its entrance portal, Khazanchi Khana (treasury house) and the Kachari Bari.

The Govinda temple at Puthia of Rajshahi district is an excellent example of the Pancha-Ratna or five spire temples in combination with typical Jor – Bangla style. The similar method has been followed on many temples in Jessore and Khulna area too.

The Govinda Temple was built between 1823 and 1895 by one of the Maharanis of the Puthia estate. The imposing temple is located inside the Panch-Ani Palace, on the left-hand side of the inner courtyard. The brick-built structure placed on 47′-6″ square raised platform, and a set of ornamental miniature towers are crowning the two-storeyed temple. There are four ornamented towers (ratnas) on each corner of the first storey, and a central one is crowning the top of the second. The whole outer wall surface of this well-preserved living temple is extensively ornamented with continuous strips of terracotta panels, predominantly depicting various episodes from great epic, the legends of Radha-Krishna, Ramayana and Mahabharata battle story, various floral and geometric designs, pictures from the Hindu epics and different mythological figures.

Especially the western facade is depicted with Lanka-Kanda, the divine romance of Radha and Krishna, ten deities (a line of terracotta panels under the curved cornice) and contemporary culture and social life (two lines of terracotta panels on the lower portion of the temple) like the Kantajee in Dinajpur.

The ground plan refers that the temple has a square room in the centre, surrounded by four small square rooms on four corner and four tiny verandahs on four sides with three cusp arched doorways. The rooms are covered with semi-circular dome and verandahs are barrel vaults. Externally it is crowned by five ornamental towers (Ratnas) which covered with the pyramidal shape of Chautala vaults. This temple is exceptional for its outer wall surface ornamentation. This temple is in regular worship by the local Hindu devotees.

This east facing brick-built temple is located close to the north-west corner of Maharani Hemantakumari residence. Ground plan of this temple is rectangular, has a triple archway in the east and one in the south. The inner wall surface of this temple are plastered, but the eastern and southern facades are embellished with terracotta plates portraying Radha-krishna-Balram myths, the episode of Ramayana and floral motifs like the Bara Govinda Temple. A do-chala roof covers the whole structure with curved cornice. This temple was erected during the first decade of the 19th century.

This east facing temple is standing on the western bank of the Shyamsagar (Sarobar) and in front of the Char-Ani Rajbari. It is an exceptional temple style in Bangladesh from the structural points of view, Raja Ram temple in Khalia of Faridpur is the only closer example to a similar style. This temple has three chambers, do-Chala in the centre and two chouchala chambers are attached on the north and south side. Therefore this style is also called tri-mandir. The central do-Chala chamber has a triple archway with an open platform on the front side. The eastern facade is highly decorated with terracotta plates, unfortunately falling apart due to lake of maintenance. This contemporary of Chhota Ahnik Mandir was erected by the Char Ani Rajas of Puthia estate.

Dol temple is located precisely on the opposite of the Royal Palace, having an open field in between. This unique style brick-built 65′ high Hindu temple was erected by Raja Vubanendra Narayan in 1778. This square-shaped four-story building is gradually rising upwards, reducing chamber sizes from all side in each upper floor then the lower ones, and consequently, the top level is the smallest. Therefore the whole structure is a pyramidal shape. The entire wall surfaces have been simply coated with a layer of plaster, and each storey is opened with arcades. The top square room is crowned with a ribbed dome, and the dome is ornamented with a kalsha finial. This temple offers a great view to all around from its top floor. 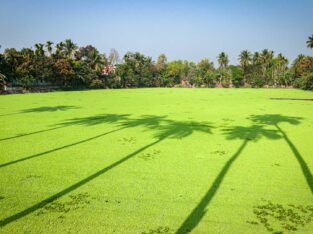 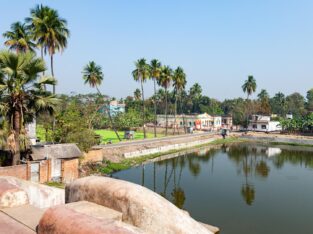 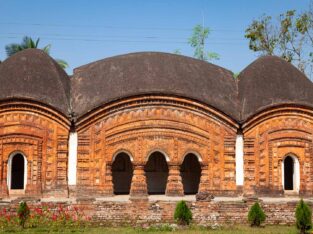 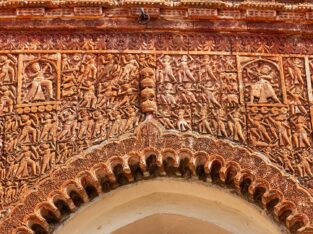 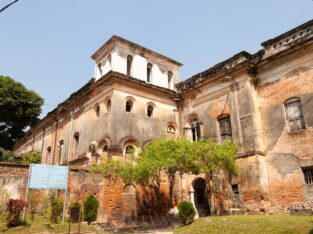 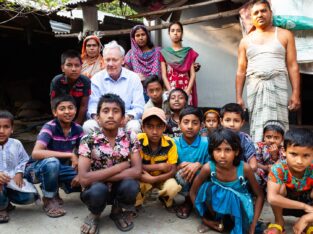 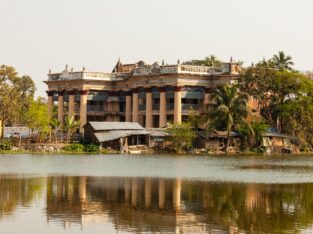 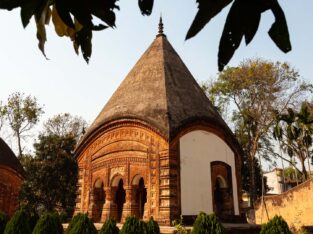 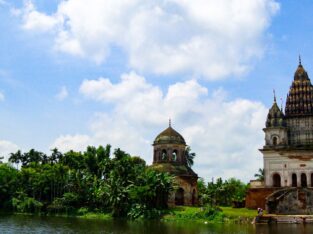 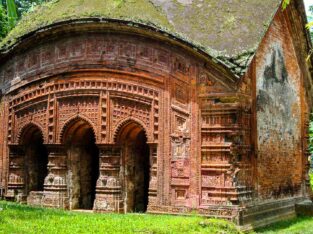 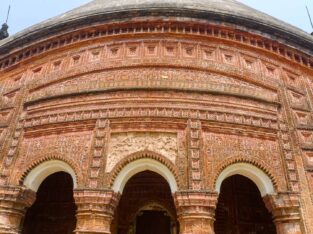 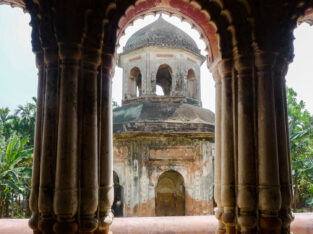 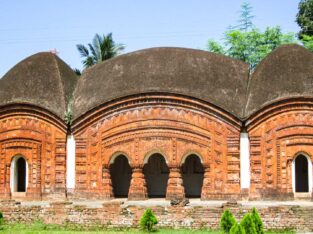 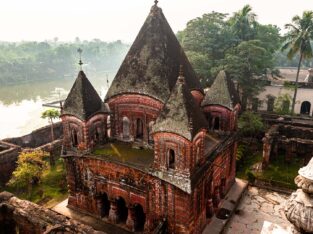 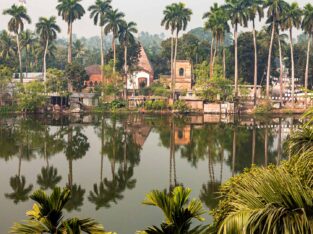 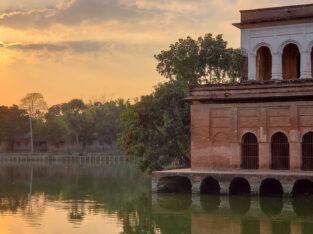 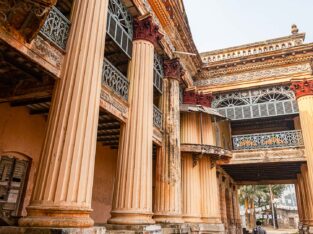 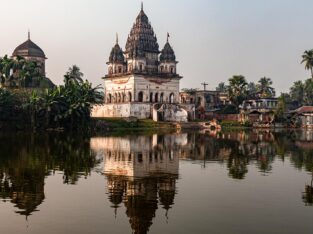 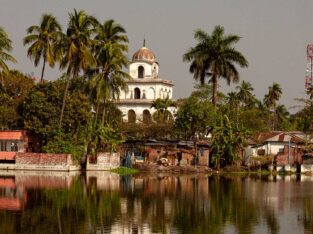 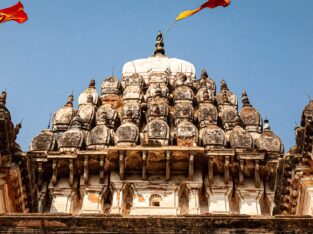 Some of our trips around this area:

Overnight Trip to Puthia and Rajshahi

Some History and Culture of Rajshahi in 3 Days

Explore the heritage sites around Rajshahi in 5 Days

Study and Travel Bangladesh in 29 Days